In the recent past, I started to get more interested in the quality of the keyboards I use at work and home. I always hated to use very cheap low-profile boards, but otherwise I more or less always worked with what came stock with my PC in the good old times ;)

A longer time ago I bought some Xtrfy K4 TKL White Edition keyboard, my first keyboard that had no numbers block. I liked it a lot and the red switches were ok for my taste. Thought I didn’t like the keycaps, they feel cheap.

Some weeks ago, I bought the Varmilo Moonlight VA88M, a TKL keyboard with nicer keycaps (both in material and design). I now used it at home for some weeks and the brown switches are fine, keycaps are fantastic, Cherry profile PBT keycaps are really nifty.

But…. The ping… Especially in the middle of the keyboard, each and every key pings. Actually you can get the ping even if you just tap a bit on the backside of the board itself, seems to be no sole switch issue :/

All reviews I read didn’t tell a thing about any ugly ping with the stock Varmilo board. Though most reviews naturally did look at the ANSI variant, but I bought the ISO one, given I like the German layout. Perhaps they just altered something in the more recent fabrication, who knows.

I did take some look at the internals of the keyboard to see if some more dampening or taping could help.

See the disassembly and later playing around with stuff and tape below. 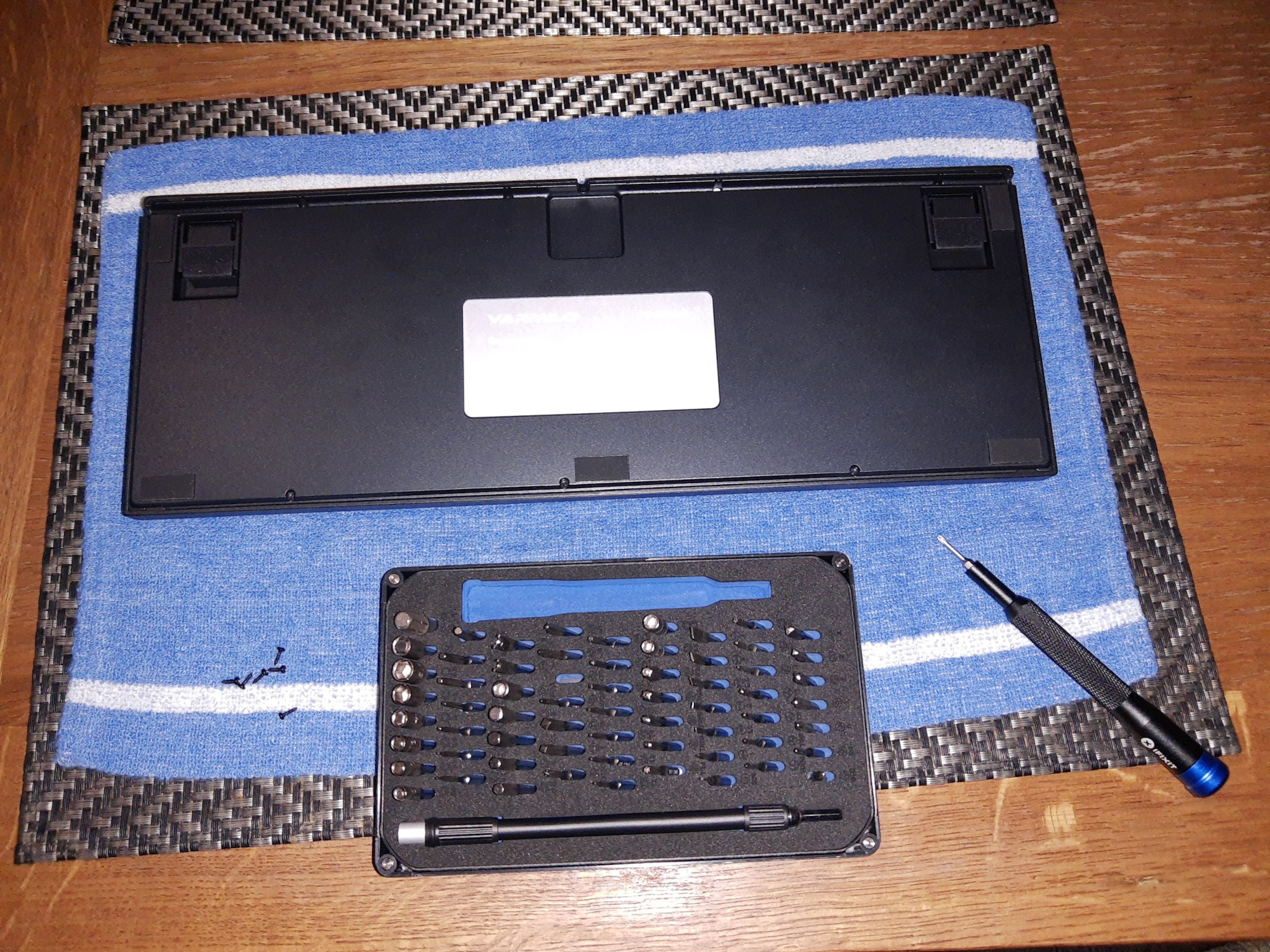 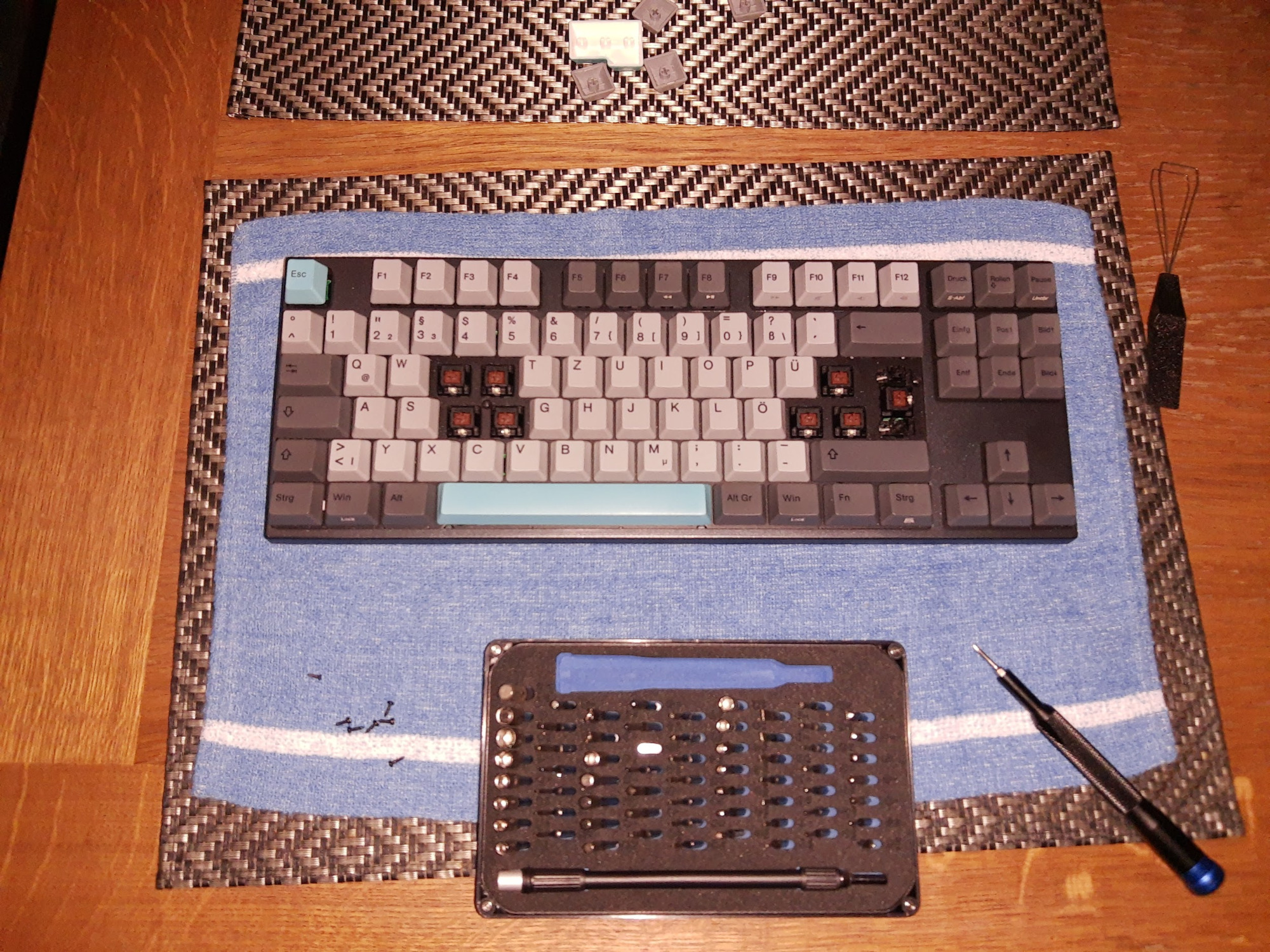 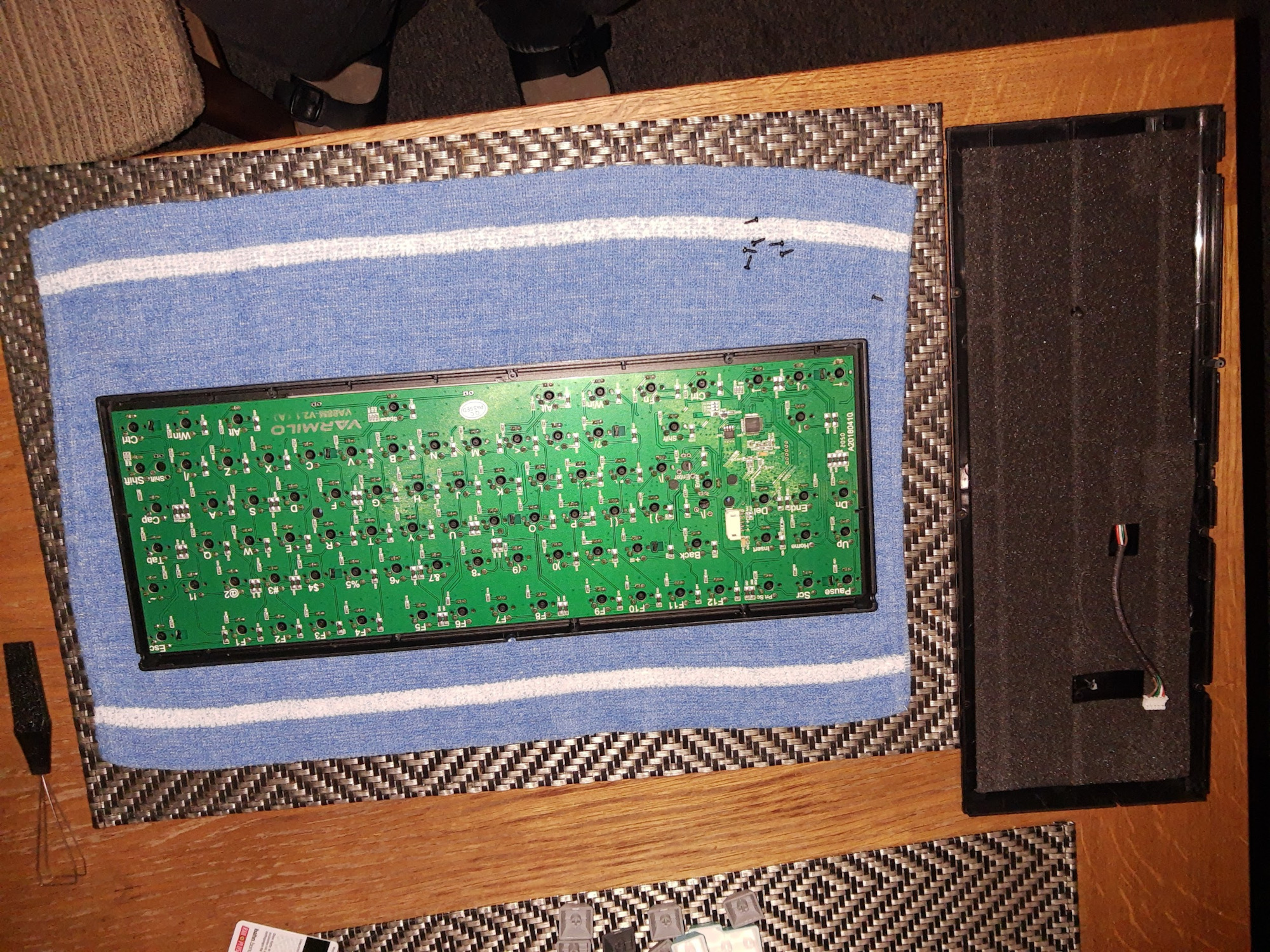 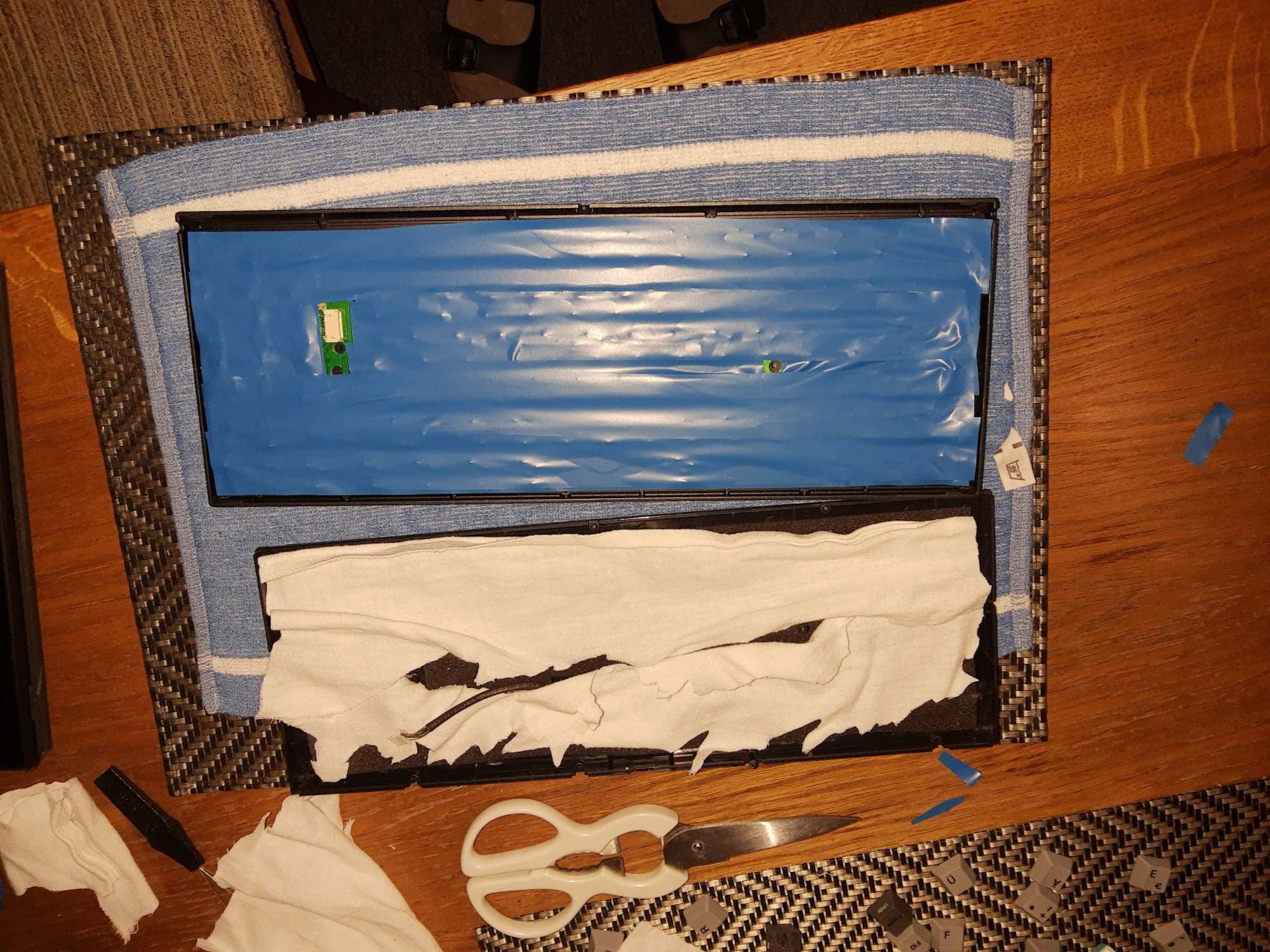 Short answer: it didn’t help. You can even stuff the lower parts totally with “anything”, given you screw all things together later it will still ping. Even alone the upper plate does ping if you tick it without any extra parts. I found no way to stabilize it in a way that removes that.

Btw., hint for anyone trying this: Yes, there is some stupid screw below some white seal at the bottom ;) Unlike the one screw that is missing on the top, there is one…

For flexing the case open, even if you are too dumb to remove all screws, my nice old BahnCard and credit cards did help a lot ;=)

Solution? Create one out of both.

Given the red switches and the typing on the Xtrfy board was nice, why not just use the Varmilo keycaps for it? 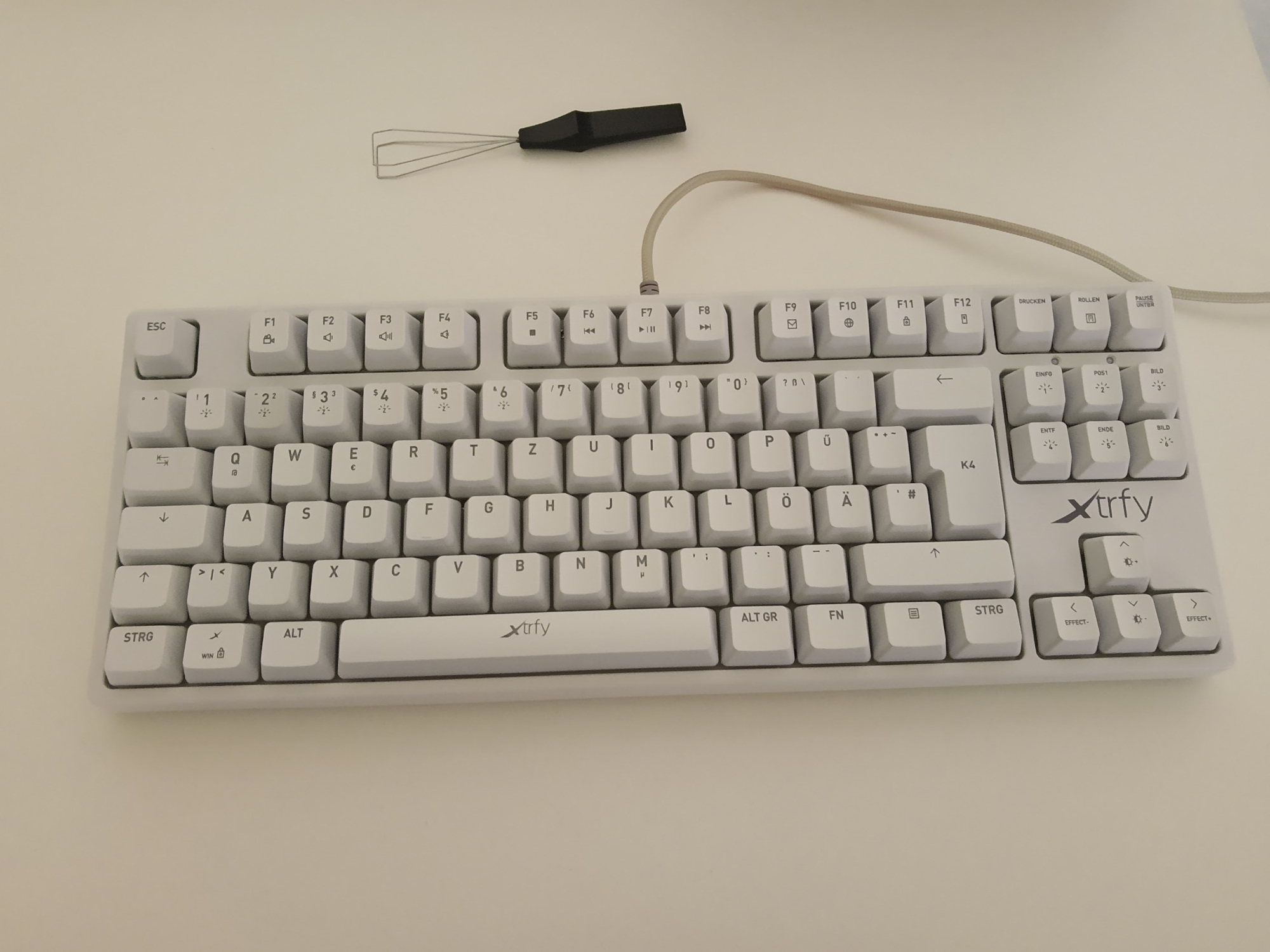 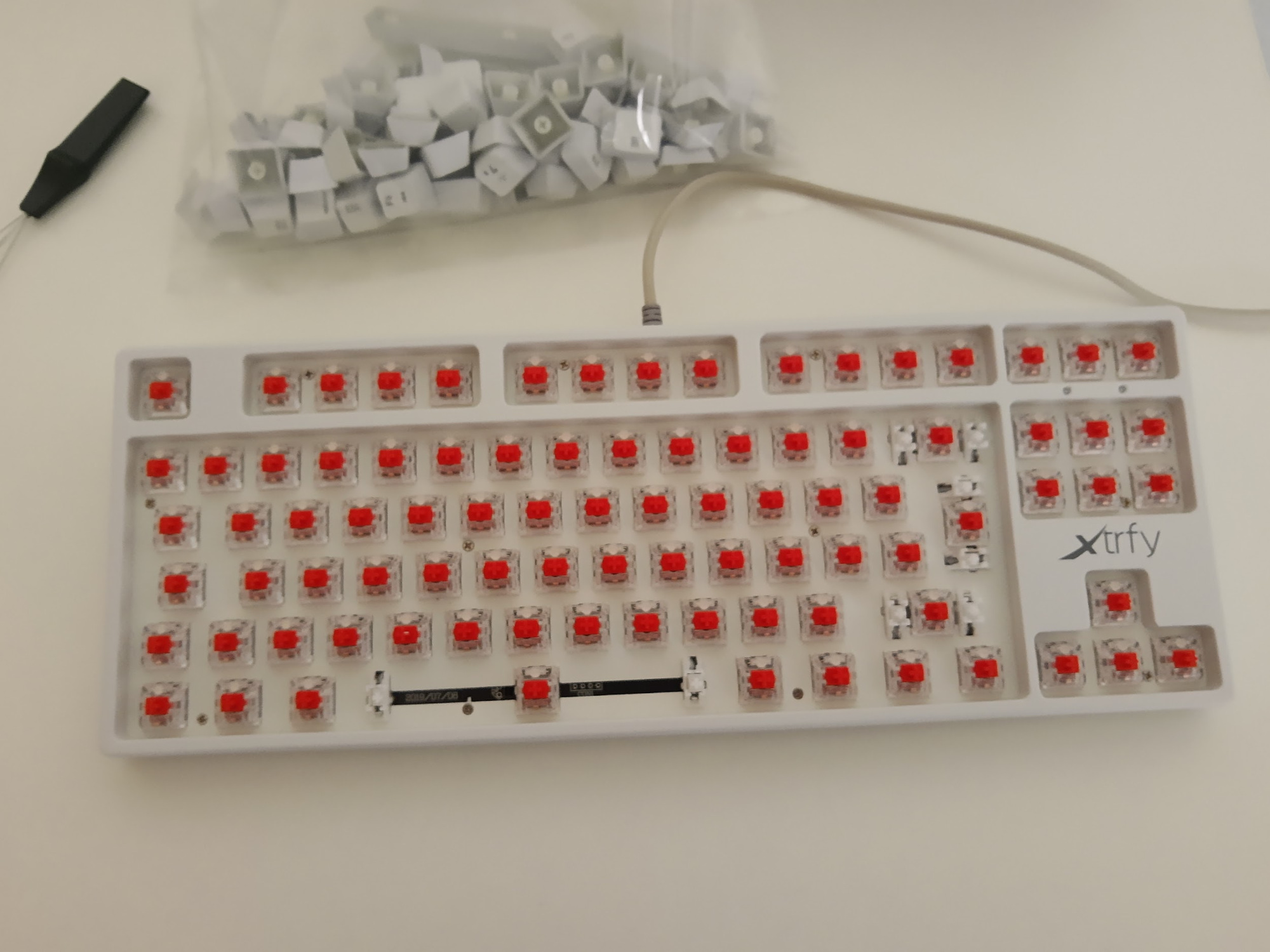 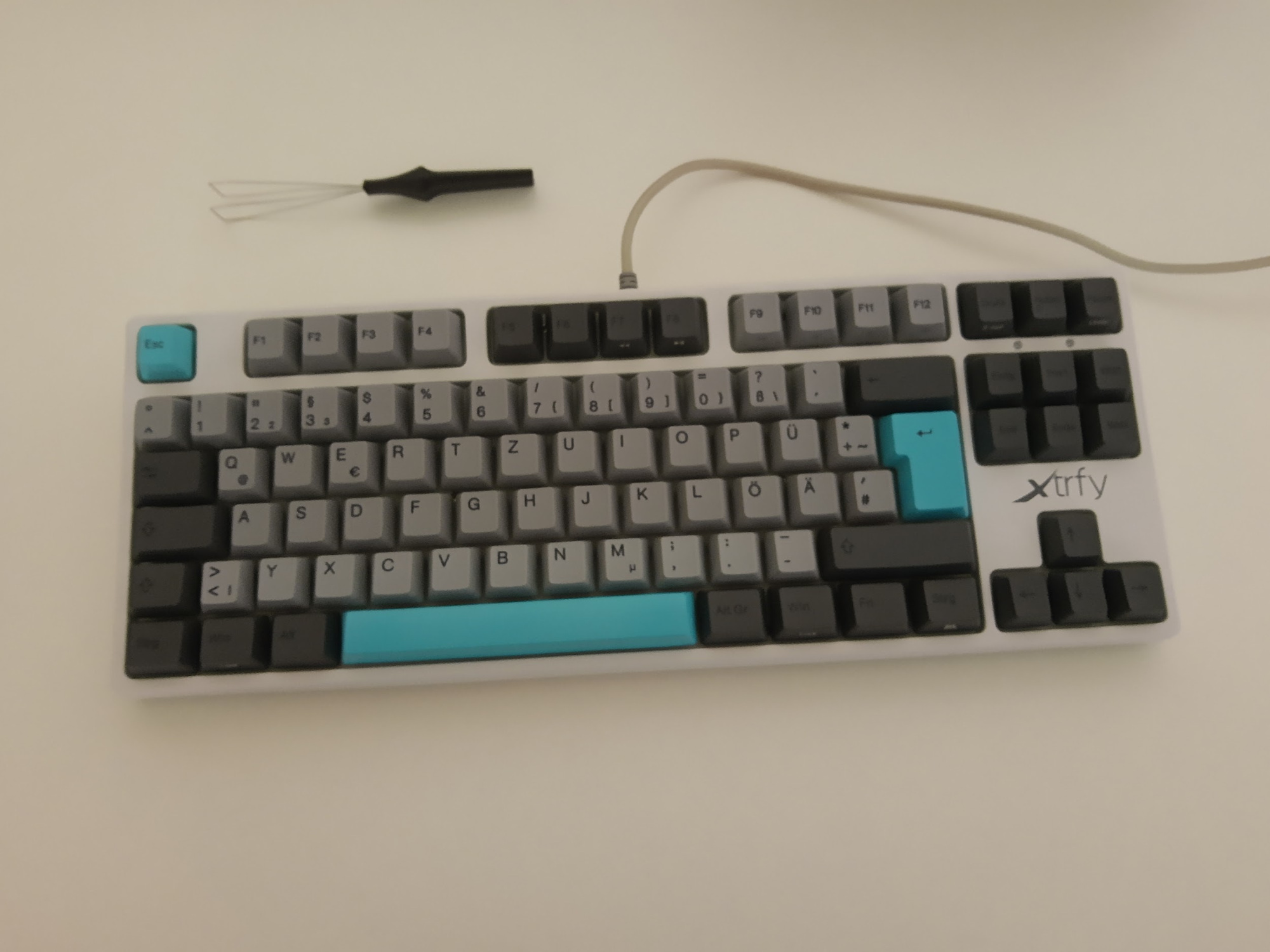 Varmilo was nice enough to include a keycaps puller anyways, already used for the total disassembly above. 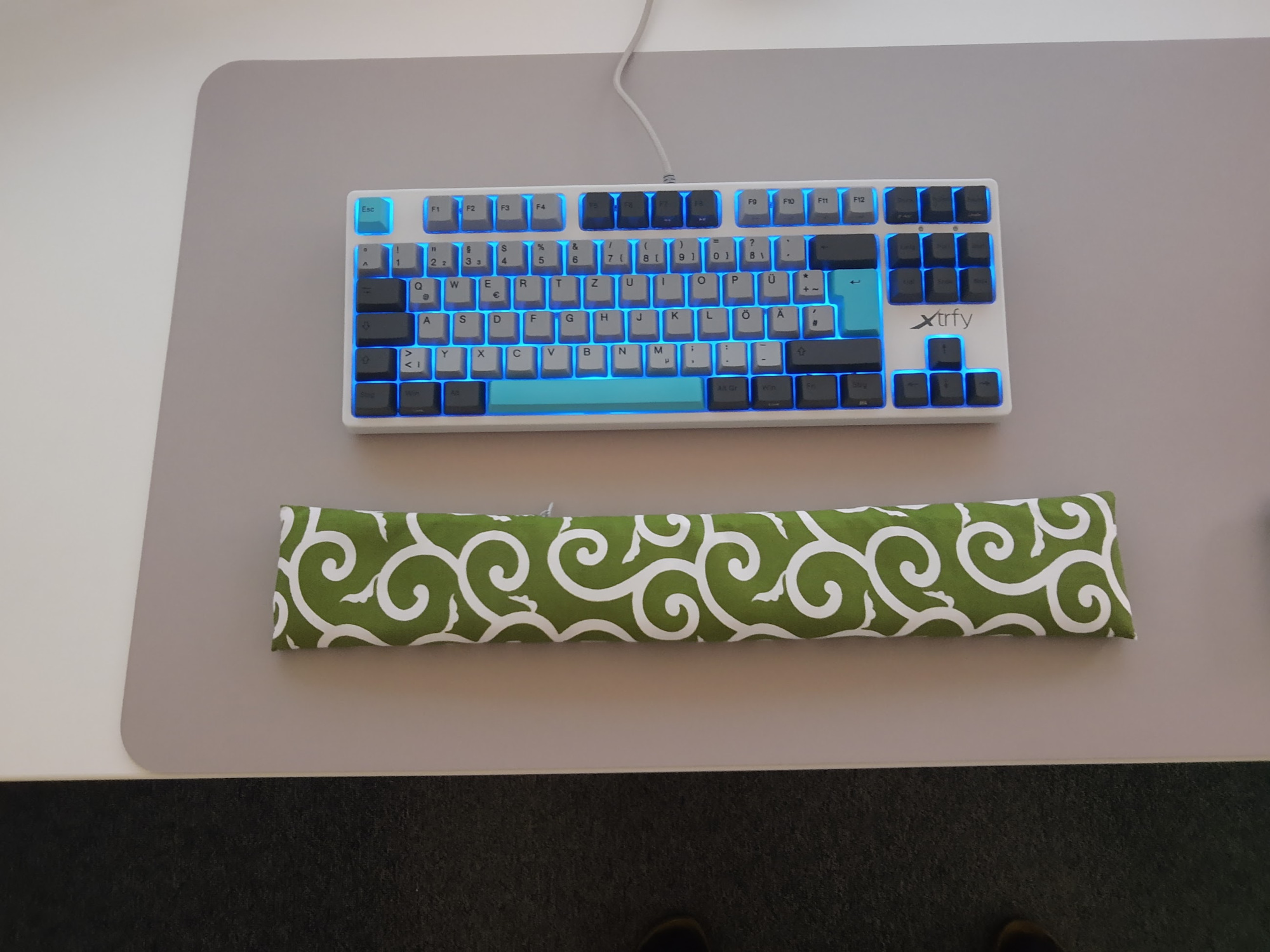 I think the final “product” looks nice. The RGB back-lighting still works, though the new keycaps are not shine-through.

In addition I have now a full shine-through ABS keycaps set as backup parts for more keyboard modding. And some more or less useless Varmilo baseboard. But who knows, if I spill too much coffee or whatever in my board, I can still re-build the Varmilo board to have something that works (and pings).

Naturally that was not the way I meant to use the new keyboard, but good enough ;) And I must confess, a bit modding around on the keyboards was fun!

For any people interested in keyboards: I think both boards mentioned above are ok. Perhaps I just was unlucky with my Varmilo board and other builds of it don’t ping at all, like the most reviews tell.